Four individuals involved in rollover crash that could be related to fatal shooting in Hennessey, according to Kingfisher County Sheriff’s Office 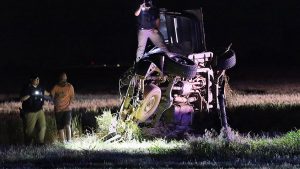 HENNESSEY, OK. – According to the Kingfisher County Sheriff’s Office, a fatal shooting that left one person dead and a rollover crash on U.S. 81 that injured three on Saturday are likely related.

Police responded to a report of shots fired at 9:40 p.m. in northwest Hennessey. Shortly thereafter, there were reports of a rollover crash on U.S. 81, according to Enid News & Eagle. The victims of the crash included the driver, Benjamin Mills, 31, of Waukomis, Michael Porter, 26, of Guthrie, Bonnie Mills 27, and an unidentified 4-year-old. The four individuals were heading southbound in a 2015 Toyota Tundra two miles north of Hennessey when the vehicle left the roadway and struck a utility pole before rolling several times and coming to rest in a field.

Porter was transported to OU Medical Center by helicopter with a head injury and is listed in critical condition. Bonnie Mills and the child were treated and released from Integris Bass Baptist Health Center in Enid, while Ben Mills was uninjured in the crash.

It is unclear at this time how the crash is connected to the shooting. The shooting and the crash are still under investigation by the Oklahoma Highway Patrol.

If you were hurt in a crash in Oklahoma, contact an experienced Oklahoma car accident lawyer at Abel Law Firm right away. Whether your accident was caused by the negligence of another motorist, a roadway defect, or a defectively designed or manufactured vehicle, we can help. Call us at (405) 451-5157 to discuss your rights and legal options with a knowledgeable Oklahoma injury attorney.